The mysterious beehive tombs in Oman Our trip to Oman was a memorable one - the sea, the desert, ancient forts and towns and hidden wadis. Everything was amazing, the real highlight, however, was visiting the Bronze age beehive tombs - 5000-year-old tombs with a peculiar shape, where the name "beehive" comes from and some of the oldest man-made structures in the world.

There are many sites scattered around the country where those tombs can be seen - some easily accessible by roads, others high in the mountains, where only a 4WD and an experienced driver can reach. We visited three sites - the beehives tombs at Al Ayn, Bat and Zukait, plus tried to find the Bawshar beehive tombs, in one of the Muscat neighbourhoods, but unfortunately, it seems they have been overtaken by urban development.

The tombs are a UNESCO World Heritage Site since 1988. The strange old buildings are called tombs, but in reality, no human remains are found there. No one is sure of their actual purpose - temples, or watchtowers, or maybe territory markers are some of the other possibilities. And while artifacts, like pottery and arrowheads, have been found and allowed the archaeologists to date the sites, nothing that would suggest what they were used exactly for has been unearthed. For now, the best guess is that those were tombs where prominent people were buried and probably functioned as temples as well.

The question of who built the tombs also remains open - today Oman has a dry desert climate - summers are hot with temperatures going 40C and over, winters are a bit cooler with occasional rain. But 5000 years ago it was a different picture with a lot more rainfall, flowing rivers and green valleys and during that time an old civilization flourished. Some researchers think it was the ancient civilization of Magan - mentioned in Mesopotamian cuneiform texts, or maybe it was a different advanced civilization, memories of which are now lost in time.

Check out our video from the beehive tombs sites:

The first site we visited was the tombs at Al Ayn. There are fewer tombs here in comparison with the site at Bat and the towers are a bit smaller, but in our opinion, it was more impressive - first, the tombs are preserved wonderfully, and second, the view of Jebel Misht in the background - a mountain of exotic limestone, is nothing short of stunning. We drove from Nizwa, it took us a little more than an hour. It was an enjoyable trip with beautiful views and nice roads. 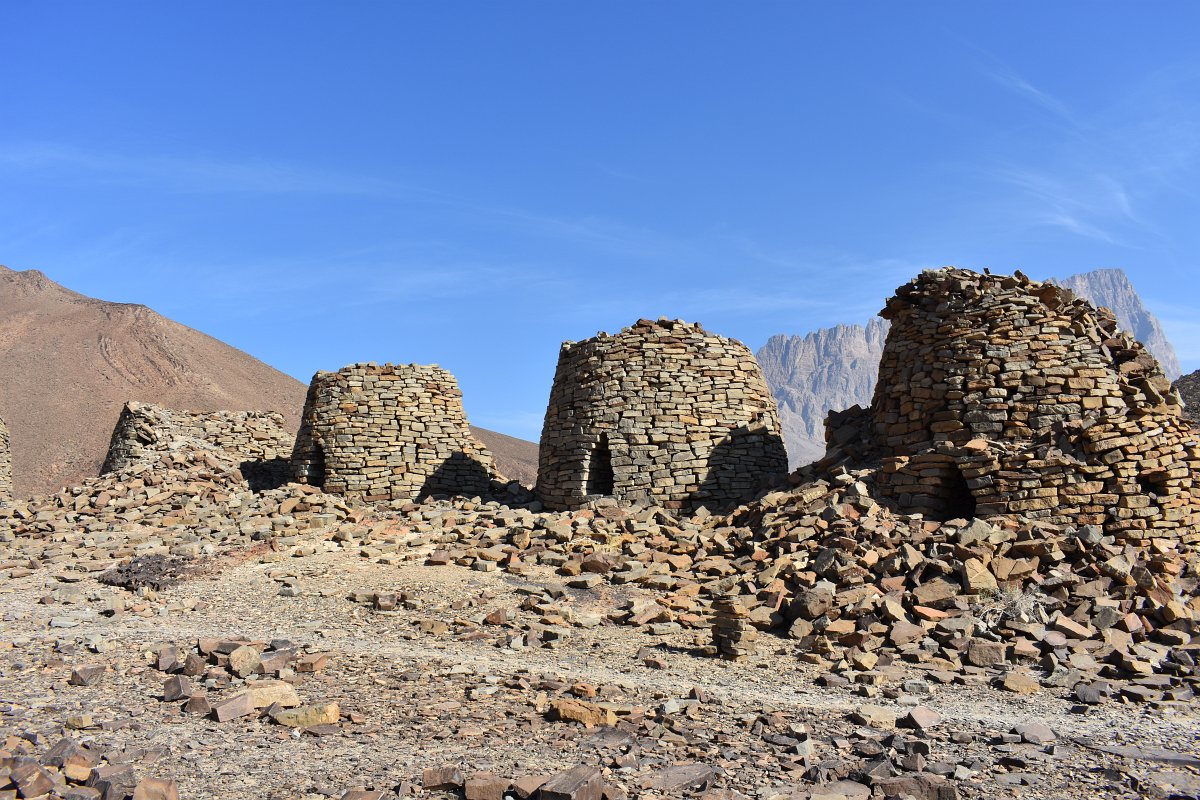 Google maps has the correct location of the tombs and they are positioned on a small hill, visible from the main road, which is good as there are no signs to point you in the right direction. We drove up and down the main road for a while looking for a way to the tombs, then we had to stop and ask one of the very few people out in the sun. It turned out there isn't a road going to the site, so we stopped on the side of the main road - directly opposite the tombs, went through some farms via a narrow dusty path and then crossed the (dry) river bed to go up to the beehive structures. It is a 5-10 minutes walk. There are 15-20 tombs here - most are very well preserved, some are crumbling. Each has an opening on the side - a door, but interestingly they are not all facing the same way. One can crawl inside and have a look of the small chamber. The feeling to stand next to something constructed 5000 years ago, to be able to touch the stones, thinking about the people who built those towers, who they were, what motivated them, what their lives were, is humbling and at the same time inspiring.

The necropolis at Bat is the largest site of beehive tombs. There are smaller tombs with only one chamber, and then there are the larger ones with 3-4 chambers. Tombs in various stages of decline - from barely recognizable piles of stones to partially restored, almost brand new looking big conical buildings - are scattered in the area and visible on the nearby hills. The size of the site is impressive if that was an actual necropolis, a graveyard, the city it was attached to must have been quite something.

This was the second beehive tomb site we visited, the same day after the Al Ayn cluster. It should be noted that the road via Ablah is not sealed, we decided to go with the highway via Ibri and Ad Dreez, which was probably a bit slower, but a better driving experience.

Finding this site proved to be a bit of a challenge. They are not visible from the main road but can be seen on the satellite image on Google maps and the spot that Google has for them is correct. We turned onto a dirt road at those coordinates: 23°16'34.8"N 56°44'29.1"E https://goo.gl/maps/4ztGoxf6HcH2 and followed it until we saw the actual ruins and were able to navigate there. This site is huge - there are several clusters of tombs along the dry river bed for 1-2 km and spread on the hills nearby. Some are smaller ones - like the tombs we saw in Al Ayn, some are bigger, with several chambers. There are a few that seem to be reconstructed recently, probably by archaeologists and a lot of completely untouched beehive structures - some in good condition, others in neat circular piles of stones. We did not expect to find so many tombs, most of the photos we had seen on the Internet showed one or two, and all the articles hadn't prepared us for the sheer size of this place. It is tombs as far as you can see, and looking at the hills nearby you start to notice the easily recognizable little piles all over.

There are no signs anywhere, nothing to explain or even mark the place. We stopped at the first cluster, the one that is right on the point Google maps has for the Bat tombs - there is a wire fence around it, but a small opening on one side allows the visitors to enter. After that we took a walk to a nearby hill to explore the tombs visible along the ridge - none were preserved, but the piles and in some cases chambers of the ruined building were still visible. As it was hot and sunny in the middle of the day we decided to jump in the car and follow one of the dirt roads that looked like was going in the direction of the next cluster of tombs visible along the dry river. It took us where we needed, and exploring on foot and in the car we spent more than an hour around the place.

The beehive tombs in Bat are simply amazing, the last memory of a long-forgotten civilization, now lost in the wrinkles of times. I keep asking myself why this place is not more popular, and probably with the advance of tourism in Oman the crowds of hungry tourists will get there eventually, but now, walking all alone around the silent crumbling structures is a spiritual experience.

150 km south-west of Bat is another beehive tombs site - the one near the village of Zukait. It is smaller, but still interesting to see, the tombs are located on the ridges of several hills. Probably because it is close to Muscat, a little over an hour, and on the road to Nizwa, this was the only place we saw other tourists - a couple with their guide. Getting to the tombs was easy - Google maps knows exactly where to guide to, at the edge of the village, to a small parking lot and a covered BBQ area. A short walk up a staircase to the top of the hill leads to the visible from the road tombs. At this site, the tombs are the smaller type and not in the best condition. The better-preserved ones are each surrounded by a wire fence cage. Built to protect from overly curious tourists, this makes it harder to take good pictures and takes a bit of the experience, unfortunately. Looking at the surrounding hills and the crumbling piles of what were beehive tombs outlined against the horizon it is clear that this site was of considerable size too. There is no path to the farther tombs, but one can walk there with a bit of effort.